Gili Trawangan is renowned for being a big party Island. I wouldn’t say I’m a big partier, but every now and then, I enjoy a big night out with my girlfriend and my mates. A bit of dancing and a little socializing is definitely a good way to make new friends and meeting people from all corners of the globe makes it even more interesting. Being on an Island in the middle of nowhere connecting with an array of diverse cultures is something very special.

During our one week visit on Gili T we got to experience some of the wildness the Island has on offer. Gili T has three main bars that hold parties every week. Mondays party is at  Blue Marlin. Wednesdays is at the ‘Tir na Nog’ Irish Bar and Fridays party is at Rudys. This is the weekly schedule, that doesn’t seem to change. On our first night we were lucky enough to get a feel for the island vibe. We arrived on a Wednesday, so the Irish bar was where it all went down. When we eventually found the place, it was relatively quiet, but the later it got, the more people arrived. Drinks were on special and we were having an awesome time. The music was good, the crowd was bubbling and we were on an amazing Island. Not much more to say! Great night!

Greg on his new bike 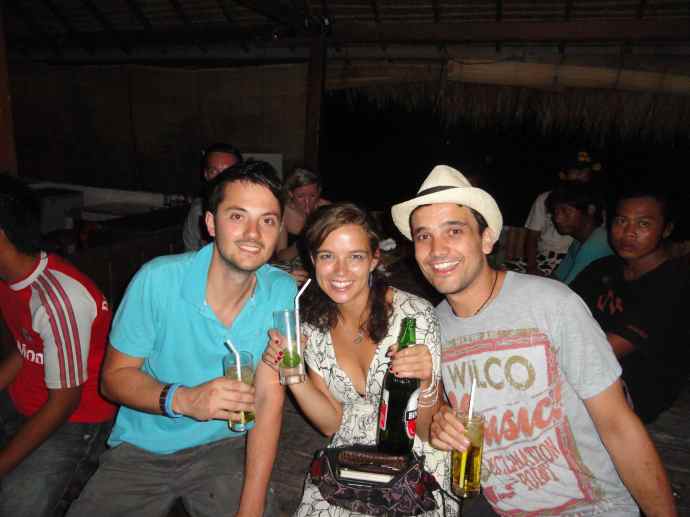 The party is getting started. Ang whats going on? A beer and a cocktail.

good to catch up my old friends 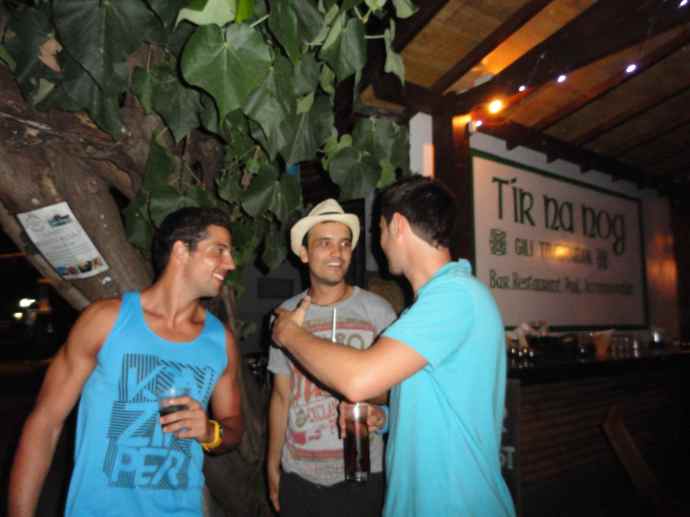 dont know who that guy is 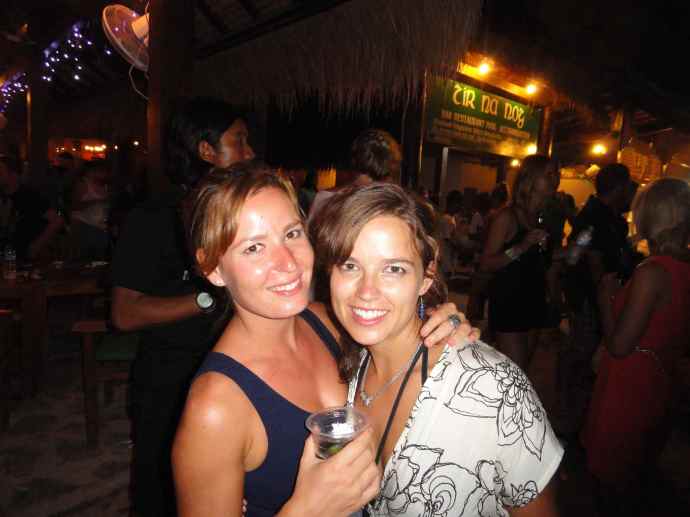 Ang and her French buddy 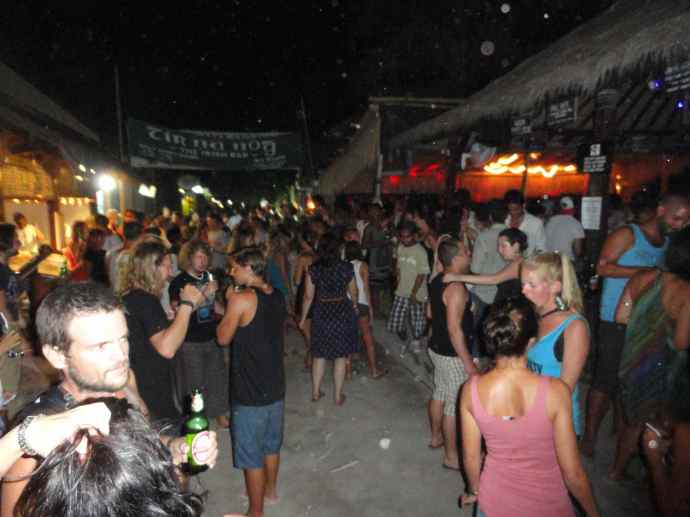 Wow! A lot of people!

what a fun night!

With all the diving we were doing, we only had two big party nights (thankful for that). Our first night went down really well, so a lot of expectation was held for the full moon party we were going to attend. Normally full moon parties have a little more on offer than a normal week day party. I mean usually if nothing else there should be a fire show and some drink specials, but this party had none of those. The moon made up for all that though. When we arrived just after 11, the place was packed to the brim. There was a bonfire at the rear of  a crowded dance floor (I’m surprised no one fell in, or maybe they did, who knows) and a bar full of anxious customers waiting to be served. In the beginning it was slow going for all of us, maybe because of the fatigue from all the diving, but thanks to some red bull, we eventually got our party shoes on and had a great time. I think the turning point was when we ran into Gavin and Adam, two American friends we had made while diving. They seemed to have good energy and put us all in good spirit. During the night I think we left the party at least three times, making our way to Rudys for a better deal on booze. It was good to take a breather every now and then anyway. Rest those burning legs a little! All in all, I think we enjoyed both nights out. For me the people you are with make the experience worth while and lucky for us, on both occasions, we had a quality crowd. Everyone seemed to connect with one another, so all that was left, was dancing the night away.

great photo with everyone. love the guy in the background 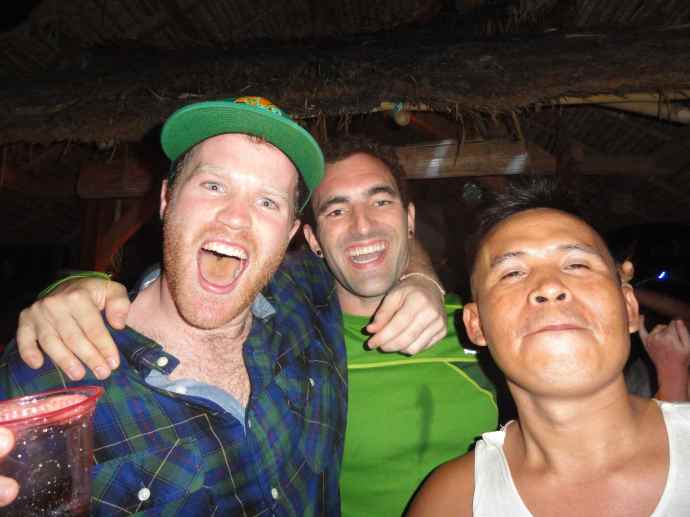 Our new friends Adam and Gavin we met while diving 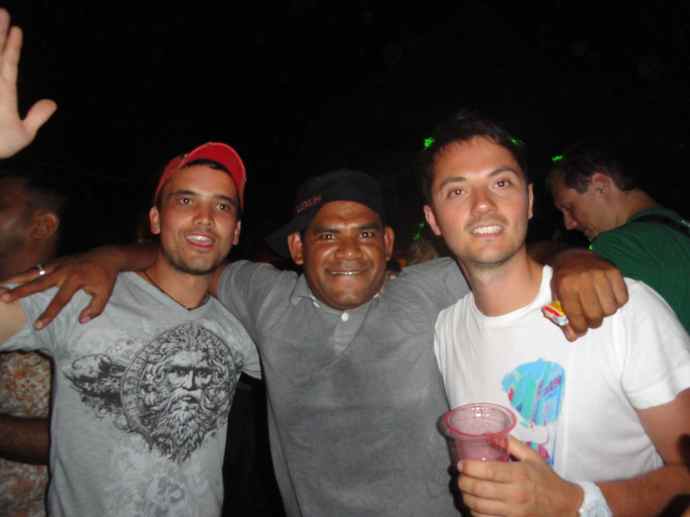 who knows what time this is 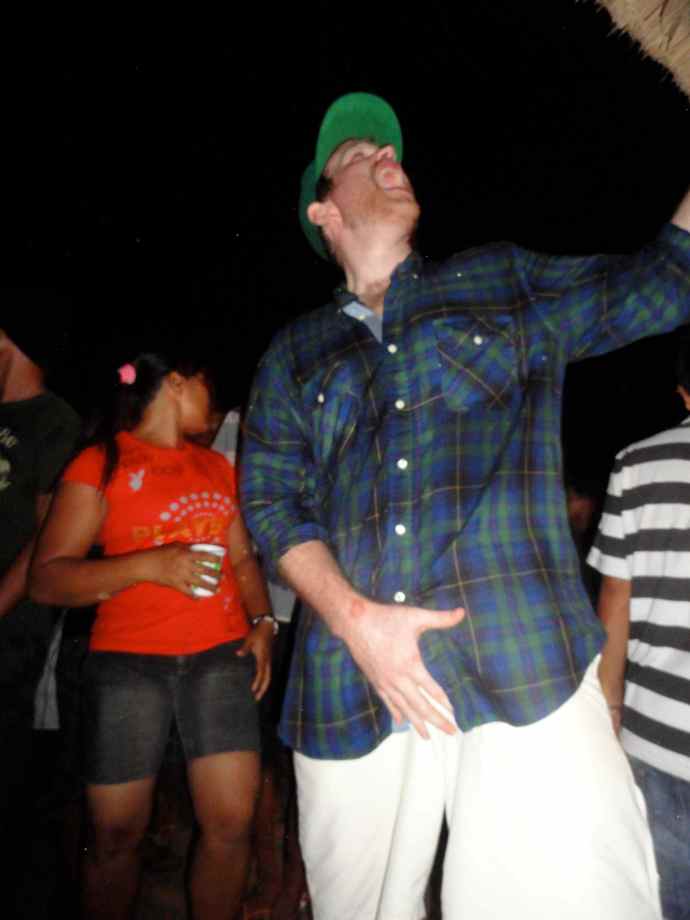